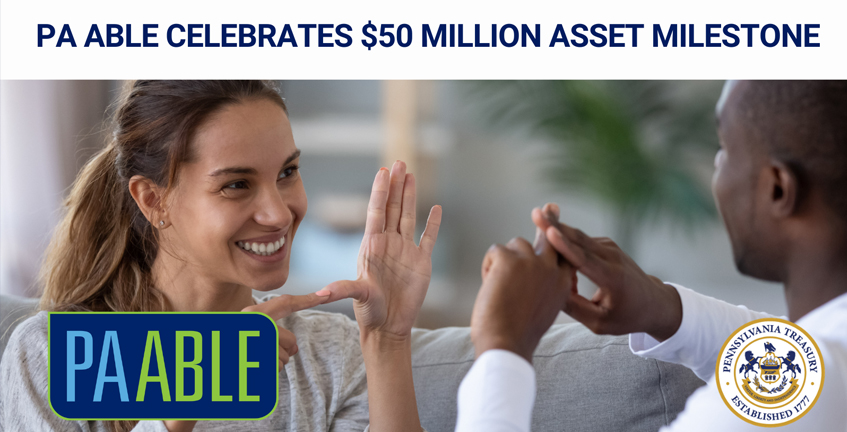 
PA ABLE is a savings program administered by Treasury that gives people with disabilities and their families the opportunity to save up to $100,000, without affecting eligibility for important government benefits, such as Supplemental Security Income or Medicaid. Since the program launched in April 2017, more than 4,800 Pennsylvanians have saved nearly $52 million to help pay for disability-related expenses. The average PA ABLE account is worth more than $10,000. That is $8,000 more than an account owner would be permitted to save without an ABLE account. That means almost 5,000 Pennsylvanians with disabilities are that much closer to economic self-sufficiency.

“In the four years since its inception, PA ABLE has helped thousands of Pennsylvanians with disabilities to save for current and future expenses, without losing their federal disability benefits such as Supplemental Security Income or Medicaid. I was glad to join Treasurer Garrity today to celebrate this milestone for PA ABLE and I look forward to working with her to build on this success.”


“It’s a tremendous achievement that the PA ABLE program has flourished so much in its four short years. The work by our staff at Treasury, the cooperation of our partners and advocates, and especially the dedication of PA ABLE account owners to save is reflected today by this large milestone. This program has a positive impact on thousands of Pennsylvanians working to ensure their own and their loved ones’ financial stability. I want to thank Senator Casey for joining us in this celebration and for all he’s done for PA ABLE.”


PA ABLE was created by state legislation with leadership from Sen. Baker and former Rep. Bernie O’Neill following the federal passage of the ABLE (Achieving a Better Life Experience) Act of 2014 — spearheaded by Senator Casey — which gave states the authority to create ABLE programs.

“From the beginning, we were convinced this investment program was a constructive way to help support families in difficult situations anticipate and meet their needs. By expanding eligibility, more families will be able to stave off problems and challenges that can become life-diminishing emergencies if unresolved.”


PA ABLE accounts help people with disabilities and their families save for day-to-day expenses such as rent or groceries, plan for long-term disability-related expenses like a modified vehicle, assistive technology or healthcare expenses, or move into their own home or start a small business. Eligibility is open to those with qualifying disabilities that occur prior to 26 years of age.


Senator Casey has recently re-introduced the ABLE Age Adjustment Act, which would expand eligibility to those with disabilities that occur prior to age 46. This would increase the number of Americans eligible for ABLE accounts from eight million to 14 million, including an estimated one million veterans.


“I strongly support the ABLE Age Adjustment Act. Having served as a colonel in the U.S. Army Reserve, I know too many men and women who suffered disabilities as a result of their service who currently do not qualify for ABLE. Increasing the age is the right thing to do for these patriotic heroes.”


PA ABLE account owners can choose from seven different tax-advantaged savings options, including an interest-bearing checking account with a debit card. Account owners can also benefit from generous tax treatment, including no federal or state income tax on savings growth or withdrawals for qualified expenses. A state income tax deduction on contributions up to $15,000 is also a unique benefit for PA ABLE account owners and account assets are exempt from state inheritance tax.


PA ABLE is one of the leading ABLE programs in the nation, and the largest program in the 18-member National ABLE Alliance, accounting for almost a quarter of all Alliance accounts and nearly 30% of the Alliance’s assets. PA ABLE’s strong program assets helped contribute to the lowering of fees across the Alliance earlier this year when the group surpassed $150 million in cumulative assets.


To learn more about PA ABLE and program eligibility, visit paable.gov or call 855-529-ABLE (2253). To stay up-to-date on Treasury news and programs, follow Treasury on Twitter or Facebook or visit patreasury.gov.